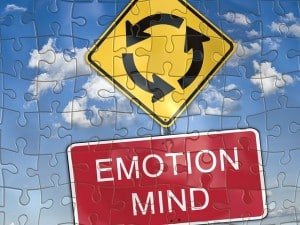 We grow up hearing a lot about emotions, “boys don’t cry”, “suck it up” “get a grip” “look on the bright side” “pull your socks up”and numerous other sayings that encourage us to “put up or shut up” and avoid expressing “negative” emotions.  No doubt the intention behind these sayings is well-meaning – an attempt to encourage us to be happy and positive, but actually, messages that encourage us to hide, suppress, avoid or judge our emotions are downright dangerous. Misconceptions about emotions are the primary obstacle to developing emotional intelligence.

1. Negative emotions are bad and should be avoided

ALL our emotions are essential and provide valuable information about the world, ourselves and our relationships. No emotion is positive or negative – they just are. Maybe some are uncomfortable and difficult to tolerate, such as anxiety and loneliness, but they are all trying to tell you something. Loneliness is telling you that you need to find someone to connect with. Anxiety is telling you that you need to prepare for a change or that something is dangerous. Ignoring or trying to avoid uncomfortable emotions means you are ignoring vital information that will help you make changes in your life.

Actually the opposite is true. Being able to express emotions, especially the most difficult ones such as insecurity, vulnerability and shame, is a sign of courage and strength. People who hide their feelings are often afraid of judgement, rejection, disapproval or retaliation but their feelings come out  in more indirect ways that often have detrimental consequences. Take insecurity as an example. No one wants to admit feeling insecure, yet, it  is an emotion that we all feel at times – especially in intimate relationships. Trying to avoid it can often cause us to behave in ways that actually pushes other people away.

3. People don’t want to hear about my difficult emotions

Granted, people probably don’t want to hear you excessively complain, bitch, moan and rant but this isn’t what talking about feelings is about. Making close intimate connections with people is essential to combat feelings of loneliness, isolation and emptiness and this is not possible unless you share what you think and feel. True intimacy is impossible without the ability to be open, honest and vulnerable. Obviously, you don’t want to start spilling your guts to a stranger at the bus stop, but talking to someone who you feel you can trust will make the connection between you both stronger. Talking about our feelings is one of the best ways to help us make sense of them and release them.

4.  If I ignore my emotions they will go away.

Emotions happen for a reason. They need to be fully felt accepted and addressed before they can pass. Any attempt to stuff them back down and ignore them will result in them coming back shouting more loudly until you listen to what they are trying to tell you! As Sigmund Freud himself observed “unexpressed emotions will never die. They are buried alive and will come forth later in uglier ways” Suppressed  emotions are the cause of a vast array of physical and psychological illnesses.

A lot of our problems with our emotions are due to the way we judge them. This can cause an “emotional pile-up”. Sometimes, when we feel depressed, we feel angry at ourselves for not being able to get out of it. Then we start feeling ashamed that we are depressed and anxious that other people might realise we are depressed. Suddenly we don’t have just one difficult emotion to deal with we have four! There is no right or wrong way to feel and judging our emotions just prevents us accepting and responding to them in healthy ways.

6. I just can’t tolerate my emotions

Yes you can, you just think you can’t. Feeling our emotions, although very uncomfortable at times, won’t kill us but avoiding them just might. Emotional suppression is known to cause a range of physical and psychological illnesses. Many people struggle with acute anxiety because of the fear that they will die or go mad. The attempts to avoid and suppress the anxiety just make it worse. All intense emotions pass in a few minutes if you can let them be there and breathe through them.

Developing the ability to accept, feel and stay with emotions can be difficult at first, but as with any new skill, the more you practice the easier it becomes.