One of the most common questions I get asked when people are struggling to quit drinking is:

“Why do I keep drinking even though I really don’t want to? I don’t even enjoy it anymore.”

It can be really demoralising when you end up drinking yet again, after promising yourself repeatedly that you’re done –

and especially when it doesn’t even do much for you anymore except leave you with a banging headache, writhing in a swamp of anxiety and shame.

The answer lies in the fact that we have – for all intents and purposes, TWO brains.

Our emotional brain’s job is to keep us alive at any given moment. To ensure our survival – it has a radar – called the amygdala – which constantly scans our world for things that are beneficial for us and things that could kill us.

But here’s the thing – the amygdala is millions of years old and doesn’t have a very sophisticated system for making its decisions.

Its yard stick is – if it feels good then it IS good. If it feels bad – it IS bad.

This worked really well back when we lived simple lives in tribes, but today in our much more complex world there is a lot of room for judgment error.

The amygdala lives purely in the moment. It doesn’t care about our future self or our dreams and goals. All it cares about is our survival NOW.

On a day to day basis – it’s constantly trying to push us away from any kind of bad feeling – even mild discomfort – and towards anything that feels remotely pleasurable.

This is why we do things like stay on the sofa when we know we should go to the gym, procrastinate when we have an important task to do, or eat a pizza when we are trying to lose weight.

The amygdala’s power over us comes from the fact that it controls our fight /flight system – basically our stress response.

When it decides something is dangerous – it activates a cascade of stress hormones that make us want to attack or run away from something.

Even something as innocuous as cleaning the house or writing a simple email can signal discomfort to the amygdala so it pushes against doing it.

You might have felt this as an unexplained resistance.

When it decides something is good for us – it generates a craving.

This is basically a milder form of the stress response coupled with a spurt of dopamine – the motivation chemical – to get us to take action. 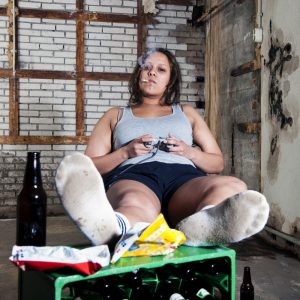 In this craving state- we are biologically programmed to focus obsessively on the ‘object of desire’ and the stress response only turns off when we get it.

If you are struggling to quit drinking you will know this state all too well.

When drinking starts to become excessive and is taking over our lives – we might not even like the taste anymore.

But this doesn’t matter to the amygdala.

It has been conditioned from years of drinking and associations to believe that drinking is vital to survival. And once it has made up its mind, it’s very difficult to recondition it.

So it will still set off the craving response and some dopamine frequently – especially when you experience something that you associate with alcohol.

It doesn’t care whether you actually want to drink – its job is to GET you to drink.

From its unsophisticated point of view – it’s just trying to keep you alive.

So you can imagine – if the amygdala is totally running the show we could end up a slave to all our desires.

But thankfully for the majority of the time it’s not. We also have a much more evolved part of our brain to help us – the rational logical brain – also known as the prefrontal cortex (PFC).

Its job is to plan, dream, and focus on the future. It’s concerned with our long term goals and plans and over-riding the urge to give in to our cravings, impulses and desires.

The PFC is why we have evolved so far as humans – it’s often called the CEO of the brain.

It basically notices when the amygdala kicks off and takes a good look around to see what is happening.

The amygdala will see a stick on the path and because it looks like a snake will panic and set off the fear response – then a few milliseconds later the PFC kicks in – pays attention to what the amygdala is screaming about and realises it’s just a stick.

It then calms down the amygdala by telling it there’s nothing to fear – it’s just a stick. 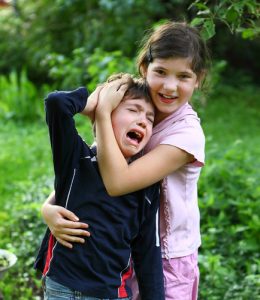 Its the same principle with cravings.

The amygdala is saying –

and the PFC will consider our long term goals, our future self and say –

“Well you’re not having it – think about how you will feel tomorrow – it’s actually going to harm us if we drink that drink, eat that donut, don’t go to the gym”.

The PFC is like an older wiser sibling to the toddler-like amygdala.

It’s the ONLY part of the brain that can control the amygdala.

You’ll no doubt have experienced these kinds of dialogues in your own mind many, many times.

If you’re struggling to quit drinking – there are two things very likely going on in your brain.

Your PFC is not working optimally,

the communication pathways between the PFC and the amygdala are not very strong – so it can shout all it likes but the amygdala won’t hear it.

You can read more about the PFC development here

It’s your rational conscious ‘human’ brain that wants to stop – that doesn’t like what drinking is doing.

And it’s your amygdala that wants to keep on drinking.

It’s the amygdala that ‘likes’ alcohol.

And the amygdala is extremely powerful without the calming rational presence of a healthy robust PFC.

So essentially to answer the question –  there is a part of your brain that likes drinking and a part that doesn’t.

It’s not that there’s something weak, immoral or inherently wrong with you. You just need to retrain your amygdala to ‘see’ alcohol as actually detrimental to survival. And build up the strength of your PFC. Which you absolutely can do.

In my next post, I’ll talk about ways that you can re-wire your brain to change you relationship with alcohol.

I’d love to hear your thoughts on this post, so please feel free to leave any comments or questions in the comment box below.