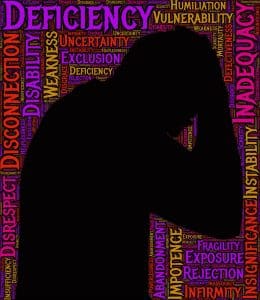 An essential part of overcoming anxiety is to address negative thinking patterns that drive it. This might seem easy in theory, but if you’ve lain awake at night trying to stop worrying or replaying a situation over and over again, you know it’s not an easy task. But it can be done. The first step is to identify the type of unhelpful thoughts that you have. There are eight types of dysfunctional thinking patterns or cognitive distortions as they are called – that have been found to relate directly to anxiety. Catastrophizing – This is probably the most common form of unhelpful thinking that fuels anxiety. It involves always imagining the worst case scenario and often starts with “what if…..?” What if the plane crashes? What if I make a fool of myself? What if I lose my job?

Emotional Reasoning – Basing your perceptions on how you feel. Thinking that because you feel anxious – there must be something dangerous happening.

Shoulds and musts – placing high expectations on ourselves and then constantly worrying about not fulfilling our expectations. I should have done this I should be able to work three jobs without getting tired.

Black and white thinking – seeing everything in absolutes – either good or bad or right or wrong instead of a more realistic shade of grey.

Personalistion – making yourself the reason for bad things that happen. If someone looks upset, you automatically think that you are the cause of it.

Focusing on the negative – you pick out a single negative detail and dwell on it extensively. You might get thirty positive reviews of something that you have done and one not so positive, but you ignore all the good reviews and ruminate over the less favourable one.

Discounting the positives – you dismiss any achievements, compliments or good things that happen to you by saying you could have done better or that it was down to luck.

Everyone has these thoughts from time to time, it is part of being human. But people who don’t suffer from anxiety are able to take a step back from them and objectively assess their validity. Good psychological health requires that we can recognize and reduce unhelpful thinking patterns by either challenging them, changing them or just detaching from them. Anxiety arises when we begin to entertain, engage and fuse with the thoughts, believing them to be one hundred percent true, which invariably they are not.

5 ways to challenge your anxious thoughts

There are a number of different ways to challenge cognitive distortions depending on the type of distortion. Once you have identified your specific negative thoughts you can try some or all of the following techniques.

This is especially useful for distortions such as labelling and jumping to conclusions. Imagine that you were in court and your freedom depended on you disputing the unhelpful thought and fining evidence that contradicted it. If for example it is the thought “ I can’t do this” or “I’m a failure” or “ People don’t like me” “ It’s never going to change” You could probably find a lot of reasons why the thought wasn’t true. Take time to list all the possible evidence that disputes these kind of thoughts

This can work with black and white thinking and mind reading or personalisation. When we assume that something is definitely true i.e. “he is angry with me” or I’m always going to have this anxiety” we can start to look for alternative explanations such as “maybe he had a bad day” “Maybe he is angry with someone else” or “ I might have anxiety some of the time but it’s not 24/7” We often use the words “always” “never” when in fact in is more accurate to say “sometimes or “often”.  There are many possible explanations for why someone acts the way they do or for why something happens. Instead of focusing on ONE point of view or explanation, consider all the possible alternatives.

There is often a benefit to holding on to certain thoughts. Constantly thinking “what if…..” can feel like you a preparing yourself and keeping yourself safe from future danger and in a sense this type of thought can be useful if used appropriately. However, constant thinking about the possibility of future scenarios can paralyze you and get you stuck in a never ending cycle. Whatever type of thought that is troubling you it’s important to look at the negative consequences of holding on to it. So with this technique – list all the costs and benefits of holding on to the thought. How does this thought impact your life? What are the difficult emotions that it generates?

Many of our difficult thoughts have very little evidence to support them. You might have anxiety about the fact that you are a complete failure and that nothing you have done in life has meant anything. However, if  you list all the reasons why you are a ‘failure’ and then list all the areas in your life that you have been a success you will probably find that there is a lot of evidence that actually disputes the thought.

5. What would you say to a friend?

We are often so much harder on ourselves than others. We would rarely talk to a friend or family member the way we talk to ourselves. Take your anxiety provoking thought and imagine a friend or a child was saying it – how would you reassure them? What would you tell them if they were sawing “I’m useless, no one likes me, I’m a failure, it’s going to be a disaster.” Now try to talk to yourself in a more compassionate, reassuring way.

At first, starting to challenge negative thoughts can be difficult – but just the act of writing them down in less anxious moments can allow us to see the absurdity of what we are thinking. We become so attached to our thoughts that it can be difficult to see past them – but they are only thoughts – they will come and go and they often don’t reflect reality at all!